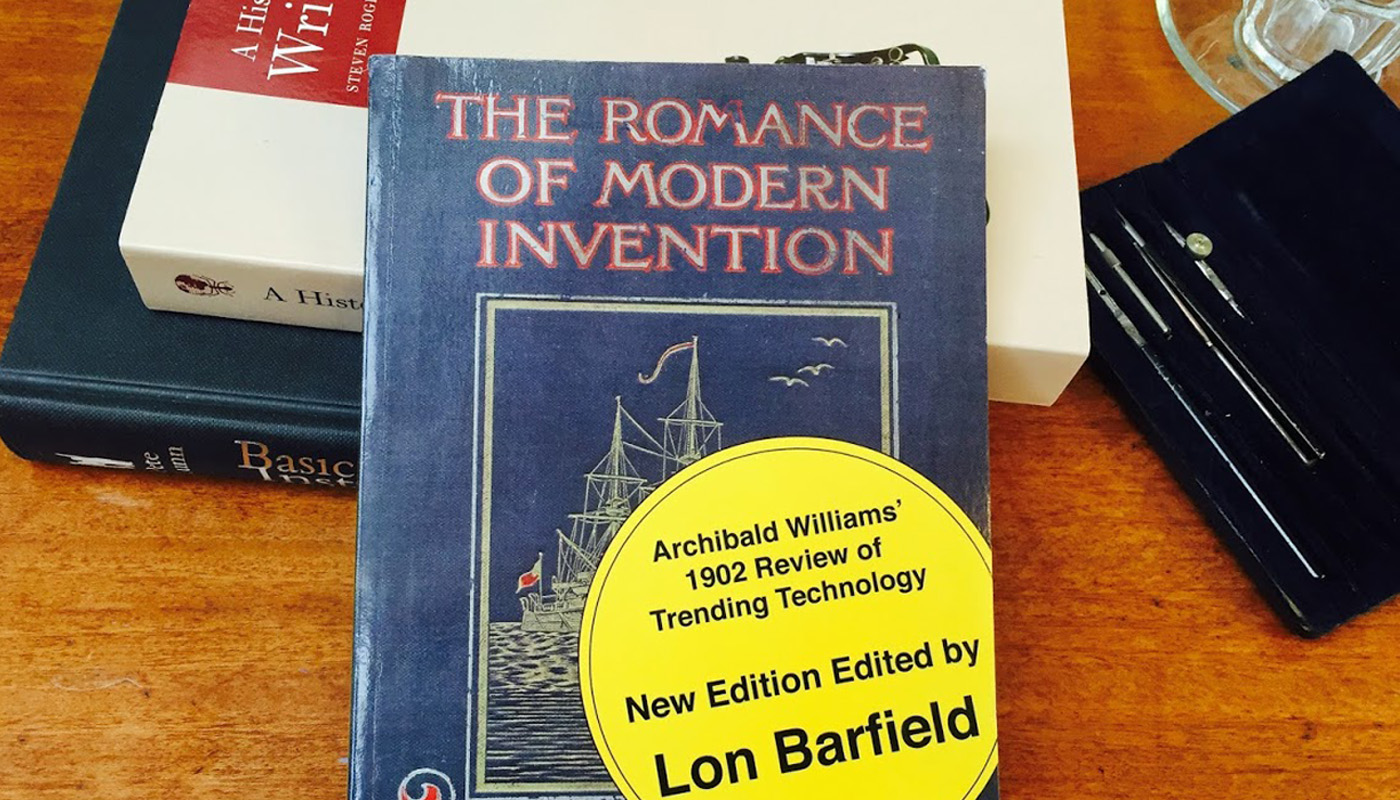 One hot Summer I was in a second-hand book shop while on holiday in Wales. There I came across an old volume entitled; ‘The Romance of Modern Invention’. It was published in 1902 and was an enthusiastic appraisal of modern technology of the time. Although it was written long before the advent of digital technology it was the era of invention, new technologies were emerging at a blistering pace. Many modern devices and services had their invention at the turn of the century in this flurry of technological innovation; familiar things like voice-mail, broadcast advertising, hybrid cars. The book even discussed mobile phones and couch potato syndrome!

I read it avidly on the bus back to the caravan where we were staying and was reading the section on Marconi’s experiments on the Welsh coast at the very moment that the bus was passing through that same area of Welsh coast. Ten minutes later, while staring out of the window I caught sight of a sign for a ‘Marconi Drive’.

I decided to edit it, restructure it and republish it. With the amazing hindsight that a century gives, I made some changes, I left out several sections to concentrate on the breakthroughs in communication and information technology and I re-ordered the remaining chapters to give a structure more relevant to today’s technological world. The chapters on military advances were dropped; tanks, dirigible torpedoes etc. I also skipped the chapters that dealt with wonders of the time, not so much great technological advances, but crowd-pulling examples of existing technology such as the Great Paris Telescope. Everyone knows about telescopes and the technology they embody, the Paris telescope was simply a very big example.

I also did my best to maintain Williams’ florid and gung-ho writing style with comments like: ‘Even Norway has a telephone system’, or ‘Roads in places as bad as only German roads can be’.

Within its pages there are examples of technologies that we think of as modern but that were actually put together albeit in basic form at the turn of the century. One example is Mr. Kumberg’s telephonograph or voicemail as we refer to it now. If you were out and someone tried to ring you the phone would record a message on an early wax-cylinder phonograph for later playback. The only drawback was that you did need a butler to be at home to carry out the operation.

Everything was being invented at once, and people were on the lookout for new applications of the technologies. One such is the transcript of Captain Walker’s unique experiments with the car in the field during the Boer War. He has a flash of insight that this new invention could actually be used by the army.

The development of the car is also a fine example of how new technology is initially born out of old technologies. The first attempts at solving the locomotion problem were conducted by experts in old technologies applying their technologies to this new area. Firstly we have Simon Stevin; an enterprising character from Holland, the land of wind, windmills and sail boats, his attempts at the horseless carriage involved fitting carriages with huge sails. Next was Johann Haustach from Nuremberg, a watchmaker by trade who tried to power a crude automobile using a massive watch spring!

Cars give us an insight into the many factors that control the development of new technology. I have often heard that early motor cars by law had to have someone walking in front of them with a red flag to warn people and prevent accidents. And according to Mr Williams this was indeed the case, but the reasoning he recounts is more out of politicking and profiteering than concern for the safety of road users. The law was introduced by British members of parliament keen to protect their ‘horsey’ lifestyle and their investment in the railway companies. When a steam powered coach was able to outpace Stephenson’s train ‘The Rocket’ in 1830, railway stakeholders lobbied parliament, pointed to the two road accidents that had so far taken place, and got them to pass the ‘red flag law’ in 1836, thus literally putting the brakes on the rapid automobile development of the time.

While the British government stuck with their horses and put the dampers on the development of the car, the French, being less horse oriented, were far more supportive of the development of the car and this is probably one of the reasons why the last large British car manufacturer has gone bust while France still has the giants of Peugeot, Renault and Citroen, and even today a part of the vocabulary of the car is  derived from the original French words, terms like chauffeur, coupe, cabriolet, sedan, even the words car and garage have French origins.

This is a nice little snippet on the subject of a global communication network:

‘If a person wished to call to a friend’ (said the Professor), ‘he would use a loud electro-magnetic voice, audible only to him who had the electromagnetic ear’.

‘Where are you?’ he would say.

‘The reply would come; ‘I am at the bottom of a coal mine’, or ‘Crossing the Andes’, or ‘In the middle of the Pacific’. Or, perhaps, in spite of all the calling, no reply would come, and the person would then know his friend was dead.’

How familiar that is to commuters on trains over a hundred years later, where the chief role of the mobile phone seems to be less about communication and more about location. The only difference being that if you don’t get a reply it’s probably just that your friend is busy rather than being dead.

The end result is an entertaining book that gives us a glimpse into the topsy-turvy world of technology at the end of the Victorian era. It is available on Amazon in the UK and USA, and it is a printed book, not an e-book!